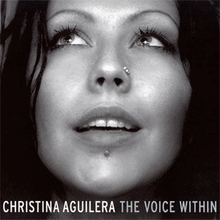 The Voice Within is a song recorded by Christina Aguilera for her fourth studio album, Stripped (2002). The song was written by Christina Aguilera and Glen Ballard, with production handled by Ballard. It is a piano-driven ballad talks about trusting oneself and one’s instincts. “The Voice Within” was released as the fifth and final single from Stripped on October 27, 2003 by RCA Records.

Upon its release, “The Voice Within” received mainly positive reviews from music critics, who called it an inspirational ballad and praised Aguilera’s strong vocals on the track. Some likened the song to works by Celine Dion and Mariah Carey. Commercially, “The Voice Within” achieved moderate success on charts worldwide, peaking within the top ten of charts in several countries including Switzerland and the United Kingdom, and it reached number 33 on the US Billboard Hot 100.

An accompanying music video for “The Voice Within” was directed by David LaChapelle. It was filmed in black and white as a one shot. The video was nominated for three MTV Video Music Awards at the 2004 ceremony. In support of Stripped, Aguilera performed the track on her two major concert tours: Justified and Stripped Tour(2002–03) and The Stripped Tour (2003). “The Voice Within” has been covered on several television talent shows.

The Voice Within was written by Aguilera and Glen Ballard and was produced by Ballard. The track was recorded by Scott Campbell at The Record Plant in Hollywood, Los Angeles, California and at NRG Recording Studios in North Hollywood, LA, CA, while it was mixed by Peter Mokran. Bass was performed by Mike Elizondo, while Matt Chamberlain played drums. Ballard also played guitar with John Goux, and played keyboards with Randy Kerber. Musically, “The Voice Within” is a piano-driven ballad. Composed in the key of G major, it has a moderately slow tempo of 66 beats per minute. Aguilera’s vocal range on the track spans from the low-note of D3 to the high-note of F♯5. Her vocals on the song were been described as strong and powerful by critics. Lyrically, the song says that one should trust one’s own mind and find strength. The motivational lyrics include, “When there’s no-one else, look inside yourself, like your oldest friend just trust the voice within”.

The Voice Within was released to US contemporary hit and adult contemporary radio stations on October 27, 2003 as the fifth and final single from Stripped by RCA Records. It was also available for Maxi singlesales in stores. Upon its release, “The Voice Within” received generally favorable reviews from music critics. Josh Kun from Spin labelled it a “swoony Celine-for-teens ballad”. Sal Cinquemani for Slant Magazine gave the song a very positive review, naming it an “inspirational” ballad and praised her powerful vocals. CD Universe also praised Aguilera’s “rich, throaty style” vocals on the track and compared the song to works by Mariah Carey. Sputnikmusic’s critic Amanda Murray commented that the song is “tacky” yet “powerful all the same”. Kyra Lennon for Yahoo! Voices praised “The Voice Within” as one of the most motivational songs. She wrote, “Hearing these uplifting words sung by Christina Aguilera’s amazing voice is an incredible pick-me-up on a bad day”. Rachel McRady of Wetpaint complimented the song’s inspiration melody, calling it “basically reduces us to tears every time we hear it”.

On November 29, 2003, “The Voice Within” made it chart debut on the US Billboard Hot 100 chart at number 62, becoming the week’s “Hot Shot Debut”. On the chart issue dated December 6, 2003, the single jumped to number 57. During the following week, the song rose to number 46. In its fourth week charting, it charted at number 36. Finally, it reached its peak at number 33 on January 10, 2004. The song became Aguilera’s eleventh top-forty hit on the chart, and remained on the Hot 100 for a total of 16 weeks. It also charted at number 11 on the Pop Songs chart, number 16 on the Adult Contemporary chart,and number 33 on the Adult Pop Songs chart. The song reached number ten on the Canadian Hot 100 chart. Throughout Europe, “The Voice Within” achieved moderate success on charts, reaching the top ten on many of them. It was also a top-ten song in Australia, peaking at number eight in the country.

The song’s music video was directed by David LaChapelle, who previously directed the music videos for “Dirrty” (2002) and “Can’t Hold Us Down” (2003). He explained to MTV News that the video’s concept, “There’s all kinds of connotations to the word ‘stripped.’ I wanted to strip it down to one take. Just her and this incredible voice. And really not have anything that is going to overshadow that. She’s trying to grow as an artist and along the way she’s taking all kinds of risks and a lot of times people let those things overshadow her ability and her talent. I wanted to bring it all back as a sort of bookend to this album”. The video begins with a close-up scene of Aguilera and zooms out to her wearing a slip and sitting in an abandoned prop room. In one continuous black and white shot, Aguilera walks through several rooms, exits the building, and finally lays on a light box. The video was filmed at a deserted theater in downtown Los Angeles. It was inspired by neorealist works. The video was nominated for three 2004 MTV Video Music Awards: Best Female Video, Viewer’s Choice, and Best Cinematography.