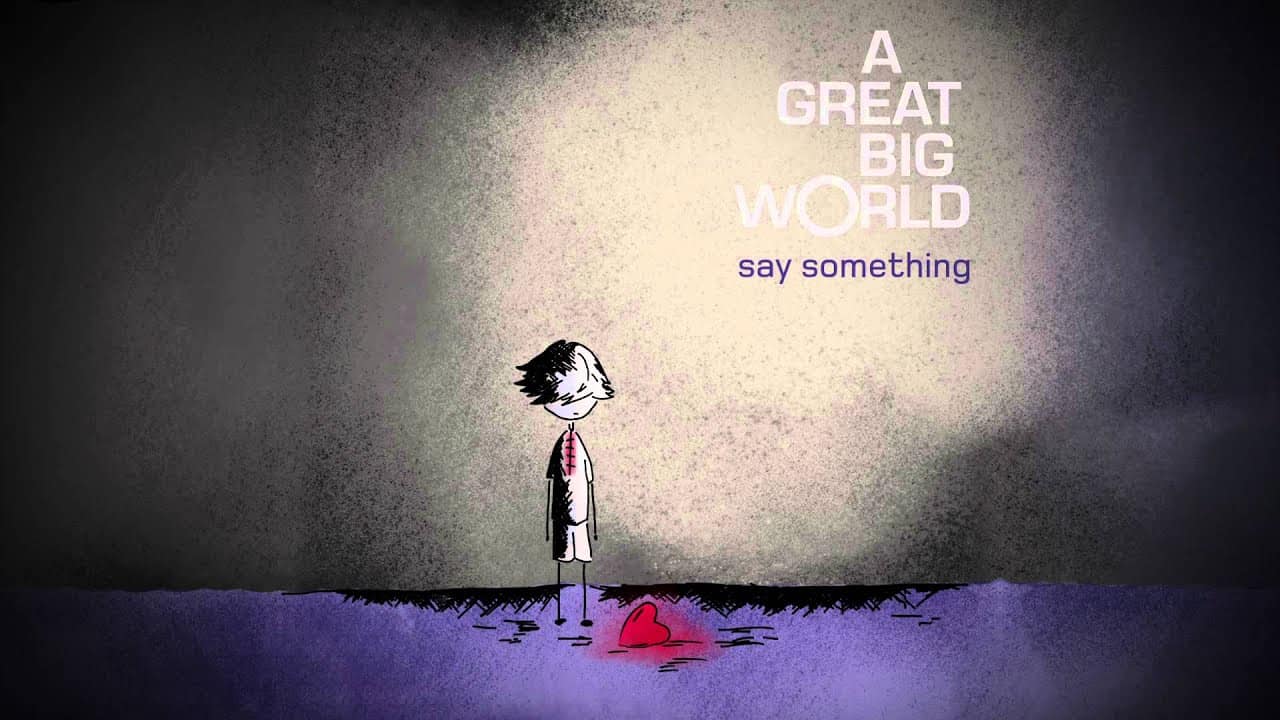 Say Something is a song by American pop duo A Great Big World, released as the lead-single from their debut album, Is There Anybody Out There? (2013). Originally being released as a solo single from band member Ian Axel’s solo album This Is the New Year in 2011, the song was released as a single by the band on September 3, 2013, via Epic Records. Following its usage on American reality TV show So You Think You Can Dance, the track gained attention from singer Christina Aguilera, who wanted to be featured on the song. Quickly afterwards, Aguilera appeared on the re-recorded version of “Say Something”, released on November 4, 2013.

Composed by Ian Axel, Chad Vaccarino and Mike Campbell, “Say Something” is a downtempo indie pop piano ballad which talks about a breakup, where the lover is implored to make a statement that could potentially reverse plans, with the singers expressing humility, sadness and regret. In the single version with Aguilera, she plays a ghost of the lover to whom the song is addressed as she traces the steps of the lead vocal. The song was critically praised for its powerful lyrics, the emotional composition and Aguilera’s vocal delivery.

Say Something did not sell significantly until the re-recorded version was available; it debuted at number 16 on the Billboard Hot 100 chart after A Great Big World and Aguilera performed the song on The Voice, while eventually peaking at number 4. It also topped the Australian charts, becoming their first number-one single (and Aguilera’s third) and reached the top-ten in most countries. A music video was released on November 19, 2013. It features the trio singing as people “act out the heartbreaking lyrics.” To further promote “Say Something”, A Great Big World performed the track on The Voice and at the American Music Awards of 2013 with Aguilera.

About approaching to the duo to re-record the track, Aguilera said,

“Somebody sent me the song (…) and it’s just the most simplest song that doesn’t have to fit a formula to be heard and to be appreciated, so I just heard it and I’ve never done anything like this before and I was just like, ‘You know’, I just started to hear a harmony part over it and I was like, ‘get in touch with these guys and see if they wanna get in the studio and sit behind the piano and just vibe together and see what happens…’ and we did, and they’re so humble, so sweet, so down to earth, and I’m all about that and supporting that, and we came together so organically and it was fun.”

“It’s so quiet and still and steady and in a way pleading. I’m only taking on projects that feel good to me and represent, as always, a purpose of the here and now in my life.”

Say Something received universal acclaim from music critics. Bill Lamb of About.com gave the song 4.5 out of 5 stars, praising its “powerful lyrics, Aguilera’s delicate vocals added to the mix” and the “emotional piano and strings arrangement,” pointing out that, “At a time in which pop music is lacking in emotional ballads, ‘Say Something’ sounds just right.” Lamb also praised Aguilera for “adding a unique resonance sounding almost as if she is the ghost of the lover to whom the song is addressed as she traces the steps of the lead vocal.” Lamb also praised her for “keeping the power of her voice in check and instead sings delicately with a breathy tone of loss.” Rick Florino of Artist Direct gave the song 5 out of 5 stars, writing that the song is “Oscar-worthy”, with “a cinematic heft to the track that makes it utterly vivid and vibrant.” Florino also praised Aguilera’s performance, calling it “one of her best ever, fortifying the hook and harmony masterfully.” Lewis Corner of Digital Spy praised Aguilera for “reminding us why she always sounds infinitely better when heading up a ballad”, calling it “a beautifully simplistic ode to heartache that evidently connects.”

Robert Copsey also of Digital Spy called it “one of her most understated outings in recent memory, and it’s all the better for it.” Jon O’Brien of Yahoo! Music noted that the song features Aguilera’s “most restrained and indeed impressive vocal in years”, calling the song ” as emotive as it is theatrical.” Melinda Newman of HitFix praised Aguilera for “show[ing] admirable restraint vocally, beautifully pairing with Axel’s vocals.” Sam Lansky of Idolator wrote that the song “was already pretty heartrending, but Aguilera’s vocals provide some lovely support and additional pathos; it’s a relief to hear that she enriches, rather than overwhelms, the track.” Bradley Stern of MuuMuse praised the “slow, sad piano melody”, the “mournful strings,” calling it “a haunting production – made even better by the Stripped diva, proving once again that less is often more.” Stern also praised Aguilera for showing a simple side of her voice, writing that she “doesn’t even have her own verse or chorus – she resigns to delivering subtle, yet effective, backing vocals for the entirety of the re-recording. It’s only in the song’s final few moments that she allows that powerhouse pipes to blow in the background. And those whispers at the very end? ‘Say something, I’m giving up on you…’ Gulp.”

The original version of the song had sold only 52,000 downloads before the version with Christina Aguilera was released, according to Nielsen SoundScan. After the performance on The Voice to a much wider audience, the song quickly shot into the upper reaches of the iTunes Songs list, reaching number 2, behind Eminem’s “The Monster” in its first hours. A day later, on November 7, 2013, the song managed to reach the number-one spot, remaining at the top for two consecutive days. “Say Something” debuted at number 16 on the Billboard Hot 100 chart, following the impact of the performance on The Voice, as the song started at number-one on Digital Songs with 189,000 sold, with the remix featuring Aguilera accounting for 86% of the song’s overall download sales in the chart’s tracking week. The song was also a success on theCanadian Hot 100, debuting at number 9 and peaking at number one.

After the performance on the AMAs, the song jumped to number 3 on the Digital Songs chart, with 197,000 copies. It also jumped from number 18 to number 10 on the Billboard Hot 100 chart, becoming A Great Big World’s first top-ten single and Aguilera’s 11th top 10 and second in 2013 (with the other being “Feel This Moment” at number eight), becoming the second time she achieved multiple top 10s in a single year, with the first being in 2000, when ‘What a Girl Wants’ (number-one for two weeks), ‘I Turn To You’ (number three) and ‘Come On Over Baby (All I Want Is You)’ (number-one for four weeks), all from her self-titled debut album, reached the top tier. The song is also Aguilera’s first top 10 with lead billing since October 2008, when her single “Keeps Gettin’ Better” debuted at its number seven peak.

Say Something also became Epic’s first top-ten hit since 2008 with You Found Me by The Fray. “Say Something” peaked at number 4 on the chart in the sixth week of release, with 39 million radio plays and sales of 233,000 copies for the week. The following week, the song sold 355,000 downloads and climbed to number 14 on Radio Songs, although it fell to number five. In February 2014, the song reached the Radio Songs top 10, becoming the band’s first top 10 and Aguilera’s ninth, marking her first Radio Songs top 10 in a lead role since “Beautiful” in 2003. The song was certified triple platinum on March 5, 2014, and it has sold over 3 million copies as of February 2014.

A music video was already shot on November 8, 2013, with Christina posting to her Twitter, Facebook and Instagram page a picture of her standing next to a piano, where the duo is playing the track. The music video, which was shot in Los Angeles, was released on November 19, 2013, exclusively on Entertainment Tonight, while VEVO premiered the video on November 20, 2013. The video features Aguilera in a minimalistic black dress and natural make-up, reminiscent of her “Beautiful” days, according to MTV’s Natasha Chandel. In the video, the trio perform the ballad as people — a child whose parents won’t stop fighting, a young couple lying coldly side by side, an older man bidding his dying wife goodbye — act out the heartbreaking lyrics.

The video received widespread acclaim from critics, due to its simplicity and honesty. For Jason Lipshut of Billboard Magazine, “Aguilera and AGBW’s Ian Axel look utterly sorrowful as they croon the break-up ballad together, with Axel carefully pounding away at the grand piano and Aguilera appearing on the verge of tears as the song reaches its climax. Meanwhile, various tear-inducing images accompany the majestic track, often in slow motion – most strikingly, an older man climbing into a hospital bed with his peaceful female counterpart and emitting a silent shout.” Peter Gicas of E! Online praised Aguilera’s emotion on the video, writing that she “serves up a certain subtleness to the clip, which is definitely appropriate given the tone of both the ballad and the video itself.” Bradley Stern of MuuMuse agreed, writing that, “Armed with nothing else but a piano and an old bed frame by her side, the ‘Lotus’ legend bares her soul and gives you pure Stripped-era vulnerability, conjuring the simple-yet-effective one-take video for ‘The Voice Within.’ No over-the-top diva theatrics, no wigs — just raw emotion and a genuinely powerful performance.”

John Walker of MTV Buzzworthy called the video “equal parts tragically beautiful and beautifully tragic. Like, hand us a bucket, because we are ugly-crying from our eyes, noses, mouths, ears, and at least 17 other places where tear ducts biologically shouldn’t be located. Mike Wass of Idolator also praised the video, writing that, “In keeping with the song’s soft and subtle tone, the visual is understated and classy. It centers around a bed and the universality of its occupants’ grief. Interspersed with those scenes is footage of the New York-based duo at the piano and Xtina looking utterly perfect in a sleek black dress. Grab a tissue and watch the emotional clip up top.” Natasha Chandel of MTV praised “a rare moment, when Xtina breaks down on camera as the hook, ‘Say something, I’m giving up on you’ crescendos, exposing a tender side to the singer that we haven’t seen since her album ‘Stripped’.