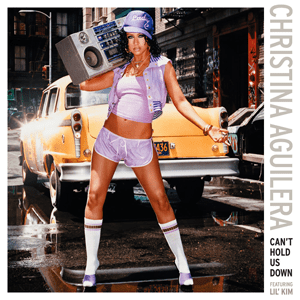 Can’t Hold Us Down is a song by Christina Aguilera featuring rapper Lil’ Kim, taken from Aguilera’s fourth studio album, Stripped (2002). It was released on July 8, 2003 by RCA Records as the fourth single from the album. The track was written and produced by Scott Storch, with additional songwriting by Aguilera and Matt Morris. An R&B and hip hop song with dancehall elements, Can’t Hold Us Down has a feminist theme as it criticizes gender-related double standards.

Can’t Hold Us Down received mixed reviews from music critics, who were ambivalent towards its production and composition. It was nominated for the Grammy Award for Best Pop Collaboration with Vocals at the 2004 ceremony, although it lost to “Whenever I Say Your Name” by Sting and Mary J. Blige. The track was moderately successful on national record charts, peaking at number 12 on the U.S. Billboard Hot 100 and charting within the top ten of several countries, including Australia and United Kingdom. “Can’t Hold Us Down” was certified gold by the Australian Recording Industry Association (ARIA).

A music video for “Can’t Hold Us Down” was directed by David LaChapelle, and was inspired by the Lower East Side of New York City during the 1980s. Aguilera performed the song during her three major concert tours: Justified and Stripped Tour (2003), The Stripped Tour (2003) and Back to Basics Tour (2006–07). To date, “Can’t Hold Us Down” has been widely recognized as a feminist anthem.

Can’t Hold Us Down is written in the key of E♭ major. It is an R&B and hip hop song, with elements of dancehall towards the end of the track; Chuck Taylor from Billboard described the melody as a “nursery-rhyme”. Aguilera and Kim’s “faux-R&B” vocals in the song span two octaves, from F3 to F5.

Lyrically, “Can’t Hold Us Down” has a feminist theme, as it criticizes the “common” gender-related double standards, in which men are applauded for their sexual behaviors, while women who behave in a similar fashion are disdained. During the song’s first verse, Aguilera sings “Call me a bitch ’cause I speak what’s on my mind / Guess it’s easier for you to swallow if I sat and smiled”; she later rejects that all women “should be seen, not heard” and encourages them to “shout louder” during the chorus. In the second verse, Aguilera comments of the double standard, “The guy gets all the glory the more he can score / While the girl can do the same and yet you call her a whore”. Lil’ Kim shares a similar sentiment during her verse in the bridge, questioning why a man is able to give a woman “some sex or sex her raw” while “if the girl do the same and then she’s a whore”.

Media outlets speculated that the lyrics of “Can’t Hold Us Down” were directed towards rapper Eminem, who referred Aguilera in his songs “Off the Wall” and “The Real Slim Shady”. Spin magazine’s Josh Kun wrote that Aguilera suggested Eminem “Must talk so big / To make up for smaller things”. According to Kelefa Sanneh writing for The New York Times, Aguilera referred to Eminem in the lyrics “It’s sad you only get your fame through controversy”.

The music video for “Can’t Hold Us Down” was directed by David LaChapelle, who previously directed the music video for Stripped’s lead single “Dirrty” in 2002. It was filmed in a Los Angeles soundstage that depicted a 1980s Lower East Side neighborhood in Manhattan, New York City. LaChapelle described the concept of the video as his “ode to the ’80s”. In the clip, Aguilera wears a pink sleeveless shirt, a sleeveless sport jacket, a pair of shorts, a mauve baseball cap embroidered with the words “Lady C”, and white long socks. She is seen with dyed black hair and is wearing dark mascara and a gold nose ring. The residents of the neighborhood are mostly Latin and black people, resembling people that live in a ghetto.

As the video begins, Aguilera is chatting with a group of women. When Aguilera leaves the conversation, a black man suddenly grabs her buttocks, making Aguilera stop and causing an argument between the two people. As she continues to sing, the nearby women in the neighborhood join her, while the male residents join the man and form their respective sides in the street. They perform their own hip hop dance skills against each other. At the bridge, Lil’ Kim appears in a bikini, a sheer black blouse and dances on her high heels. The argument ends with Aguilera spraying the men with a water hose, which she holds between her legs and parodies the male penis.

Jason Heller from The AV Club criticized LaChappelle for “[swallowing] the message” of the track by following an unrelated concept in the clip. In their book Music Video and the Politics of Representation, Diane Railton and Paul Watson felt that the video exemplified cultural appropriation, specifically noting how Aguilera conducted herself as an African-American woman, and elaborated that it emphasized “a range of issues concerning the represent of gender and race”. Andy Cohn from The Fader provided a more favorable review, and opined that Aguilera’s “sass” helped to highlight her Irish and Ecuadorian background.

Since its release, “Can’t Hold Us Down” has been recognized as a feminist anthem. Nicholas Ransbottom from The Charleston Gazette placed the song on his list of the top ten songs of female empowerment in 2013, calling it a “great anthem about women sticking up for themselves in a misogynistic world”. Several writers for The AV Club included the track on their list of seventeen “well-intended yet misguided feminist anthems” in 2010; they agreed that the song itself was “actually one of her better songs”, although they felt that its accompanying music video overshadowed its lyrical “[confrontation of] the double standard of female sexuality” since Aguilera conducted herself in a provocative fashion that conflicted its intended meaning. Yasamin Saeidi from Burton Mail listed “Can’t Hold Us Down” on her list of the “top ten empowering lady anthems” in 2013.

The music video for “Can’t Hold Us Down” has received scholarly attention as an example of cultural appropriation. Murali Balaji, author of the article “Vixen Resistin’: Redefining black womanhood in hip-hop music videos” published in the Journal of Black Studies, noted that “blackness and sexuality” has become characteristics by which African-American women are able to self-define. Consequently, he opined that the inclusion of Lil’ Kim in the clip represented an element of “‘primitive’ sexuality”, which Aguilera intended to imitate through her own behavior in the video. In their article “Naughty girls and red-blooded women: Representations of female heterosexuality in music video”, published in Feminist Media Studies, Diane Railton and Paul Watson made specific note of the conflicting message raised by the lyrics “all my girls around the world”, while “blackness and whiteness are clearly inscribed on and through the bodies of Aguilera and Kim.” They suggested that this example detracted the message of the track by emphasizing the problem that “female heterosexuality” is confined to “the very limited range of ways” in mainstream culture, in this instance “gender and race [and] sexual behaviour”.