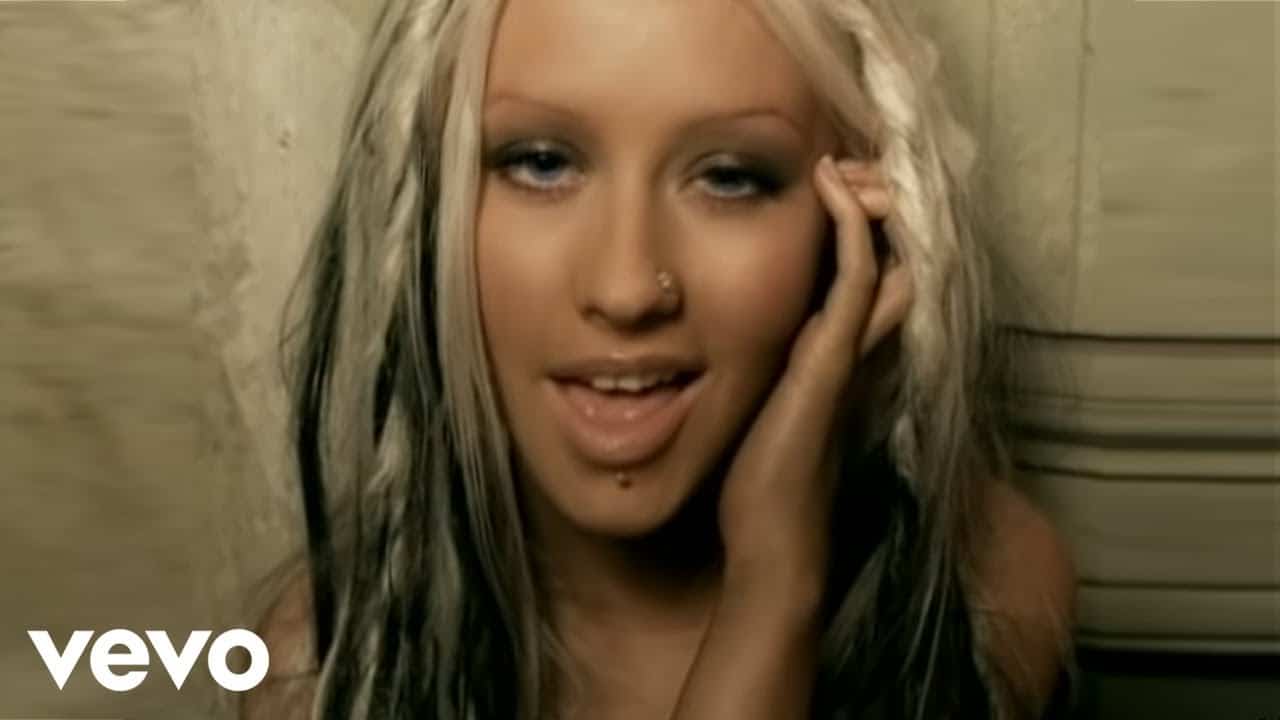 Beautiful is a song by Christina Aguilera, taken from her fourth studio album, Stripped. It was released on November 16, 2002 as the second single from the album. A pop ballad, “Beautiful” was written and produced by Linda Perry. Lyrically, it discusses inner beauty, as well as self-esteem and insecurity issues. Aguilera commented that she put “her heart and her soul” into the track, which she felt represented the theme of Stripped. The song was later re-recorded in anelectronic style for her first greatest hits album Keeps Gettin’ Better: A Decade of Hits (2008).

Upon its release, “Beautiful” received acclaim from music critics, who have ranked it among Aguilera’s strongest material. It won a Grammy Award for Best Female Pop Vocal Performance and was also nominated for Song of the Year at the 2004 ceremony. “Beautiful” was also a commercial success, topping the charts in Australia, Belgium, Canada, Ireland, New Zealand and the United Kingdom. The song peaked at number two on the Billboard Hot 100 in the United States, where it was certified goldfor 500,000 units shipped.

Beautiful has been widely embraced as an anthem by the LGBT community for its message of self-empowerment and inner beauty. An accompanying music video was directed by Jonas Åkerlund, and earned Aguilera a GLAAD Media Award for its positive portrayal of gay and transgender people. In 2011, UK LGBT rights organizationStonewall named “Beautiful” the most empowering song of the previous decade for gay, lesbian, and bisexual people. In 2009, Rolling Stone and VH1 listed it as one of the best songs of the 2000s. The song is widely recognized as one of Aguilera’s signature songs and has been covered on numerous occasions and featured on several television shows.

Beautiful was written and produced by Linda Perry. Aguilera recorded the song at two studios: The Enterprise Studios in Burbank, California and Conway Recording Studios in Hollywood. Prior to the collaboration with Aguilera, Perry had written the song and originally wished the keep the “personal” record for her own singing career. During the recording sessions of Pink’s second studio album, Missundaztood (2001), in which Perry is a producer, the songwriter initially previewed the song for the singer. However, after hearing Aguilera sing the song at Perry’s house to “break the ice”, Perry was very impressed and allowed Aguilera to include the track on her then upcoming record Stripped, effectively deciding not to pursue a solo career. The choice resulted in a feud between Pink against Aguilera and Perry, with the former commenting that it was “annoying” for the latter to collaborate with artists “[she] didn’t like”. Perry later revealed to ASCAP, “When Christina came over to my house to start working, she asked me to play some songs to break the ice. […] I had a long conversation with my manager about it. We both decided to hear Christina sing it. We demoed the song with her singing it, and I was like, ‘Wow’. That rough vocal is what is out there on radio. It was that vocal that got her the song”. “Beautiful” is a gentle pop ballad. The song was recorded at The Enterprise Studios in Burbank, California and Conway Studios in Hollywood, Los Angeles, California. Its instrumentation incorporates bass guitar,cello, drum kits, keyboards, piano, and violin. “Beautiful” was composed in the key of E♭ major and moving at a slow 78 beats per minute. Aguilera’s vocal range spans over two octaves from E♭3 to G5; she uses several melismas in the song, fitting as many as seven notes in one syllable.

Upon its release, “Beautiful” received universal acclaim from music critics. Stephen Thomas Erlewine of AllMusic complimented the song for not following the “club and street-level R&B, which fit her poorly”. Similarly, a reviewer from Billboard recognized “Beautiful” as a “single-worthy ballad” from a record of “pleasantly surprising depth”. In a separate review, Chuck Taylor from the same magazine labeled the song “breathtaking”, and recognized its melody and lyrical message. Entertainment Weekly’s David Browne called the song one of Stripped’s “moments”, noting that it is “more restrained” than the other songs from the album. Sal Cinquemani of Slant Magazine commented that the collaboration with Linda Perry found Aguilera “truly naked” and reflective of the album’s title. Stylus Magazine’s Todd Burns gave Stripped a negative review, but complimented “Beautiful” for “tastefully [reining] in Aguilera’s frequent vocal acrobatics”. Jane Dark of The Village Voice compared the song to the works of Mariah Carey “made back when she was a natural”. In contrast, Amanda Murray from Sputnikmusiccriticized the “platitude-drenched” lyrics but praised the overall production. At the 2004 Grammy Awards, “Beautiful” won the award for Best Female Pop Vocal Performance and was nominated for Song of the Year.

Beautiful has been recognized as being among Aguilera’s strongest tracks. The song was recognized as her third-best single by Rachel McRady of Wetpaint, who commented that “Xtina’s inspiration ballad motivated an entire generation”. PopCrush’s Alexandra Capotorto named it as her favorite track by Aguilera, opining that the song is “definitely one of the most memorable and greatest Christina Aguilera songs to date”. Rolling Stone ranked “Beautiful” at number 52 on their list of the 100 best songs of the 2000s, elaborating that it is “delivered with full-fathom force by the bottle-blond with the biggest voice”. Similarly, VH1 positioned the track at number 18 on their list of the 100 greatest songs of the past decade.

Beautiful was quickly released after the underperformance of the album’s first single, “Dirrty”. It achieved international success and was the highest-charting single from Stripped in several territories. The song peaked at number 2 on the US Billboard Hot 100 and became Aguilera’s longest-charting solo track, spending twenty-seven weeks on the chart. The song additionally topped Billboard Adult Contemporary, Hot Dance Club Songs, and Pop Songs component charts. By March 2006, it was certified gold by the Recording Industry Association of America (RIAA) for shipments of 500,000 copies. In Canada, the song reached number 1 on the Billboard Canadian Hot 100.

Beautiful proved similarly successful in Europe, where it peaked within the top five of most markets in which it was released. Spending a total of fifty-one weeks on the UK Singles Chart, the song eventually peaked atop the chart; it was certified silver by the British Phonographic Industry. It peaked at numbers 3 and 18 on the Belgian Ultratop 50 and Ultratop 40, respectively. In Germany, the song peaked at number 9 after charting for thirteen weeks on the Media Control Charts. However, “Beautiful” proved less successful on the French Syndicat National de l’Édition Phonographique, where it reached number 27. In the Pacific regions, the song failed to chart in any Asian markets, but maintained a strong performance in Oceania. It peaked at number 1 on the Australian ARIA Charts, where it spent a total of thirteen weeks. “Beautiful” was later certified platinum by the Australian Recording Industry Association (ARIA) for shipments of 70,000 units. The song also charted on the New Zealand Top 40 Singles Chart for twenty-three weeks, during which period it peaked at number 1. After passing 7,500 shipments, “Beautiful” was recognized with a gold certification by the Recording Industry Association of New Zealand (RIANZ).

The accompanying music video for “Beautiful” was directed by Jonas Åkerlund and premiered on December 9, 2002. It opens with Aguilera speaking the line “Don’t look at me”, followed by scenes of her singing alone in a room intercut with self-image-related sequences of other people. An underweight girl examines herself in a mirror, eventually punching through it; a thin teenage boy stands lifting weights in a room plastered with images of bodybuilders; and an African-American girl rips out pages of women’s magazines including photos of only white women and throws them into a fire. In one sequence, a girl is physically bullied by several peers, and in another, a goth man sits at the back of a bus while several people get up and move. The video also touches on LGBT issues; one scene features a gay couple, portrayed by Jordan Shannon and Justin Croft, kissing on a bench and ignoring the stares of people who pass them. Another shows a transgender person, played by Robert Sherman, putting on makeup, a wig, and women’s clothing. The music video debuted at number 2 on Total Request Live, spending a total of fifty days on the chart and retiring at number 6. It topped MuchMusic’s Countdown for two consecutive weeks and remained on the countdown for fifteen weeks. The video received a Special Recognition award, presented by David LaChapelle, from the Gay & Lesbian Alliance Against Defamation at its 14th GLAAD Media Awards. After an a cappella performance of the song, Aguilera stated in her acceptance speech that “this song is definitely a universal message that everybody can relate to – anyone that’s been discriminated against or unaccepted, unappreciated or disrespected just because of who you are.

Recognized as one of her signature songs, Aguilera has performed “Beautiful” at a number of venues and events. During the promotion of Stripped, she appeared on VH1’s Big In Awards, Top of the Pops, and the 46th Grammy Awards. The song was included on the setlists of The Stripped Tour, the Justified and Stripped Tour in 2003 and the Back to Basics Tour in 2006. “Beautiful” was also sung on the television special VH1 Storytellers in 2010. “Beautiful” has also been performed on charity events and fundraisings, such as CNN Heroes in 2008, Justin Timberlake & Friends in 2010, and Hurricane Sandy: Coming Together in 2012.

Beautiful has been embraced by the LGBT community as an anthem. On October 5, 2010, several hundred people gathered in front of the Massachusetts State House and sang “Beautiful” as a tribute to the teenagers that committed suicide due to anti-gay bullying during the previous months. In March 2011, the Columbus Children’s Choir and Columbus Gay Men’s Chorus joined to perform the song as a contribution to the It Gets Better Project. UK LGBT rights charity Stonewall named “Beautiful” the most empowering song of the decade for lesbian, gay and bisexual people; media personality and Stonewall contributor Paul Gambaccini called the song “a major achievement that has inspired millions of young people around the world.” The result is based on the choice from 1,007 readers. Aguilera commented of the song’s reception, “I cannot express in words how much the LGBT community means to me. On my darkest day their support lifts me up. I feel honored that some of my songs become anthems to them as well.” Additionally, a cover of the song was featured on a Foundation for a Better Life commercial, promoting courtesy and friendship.